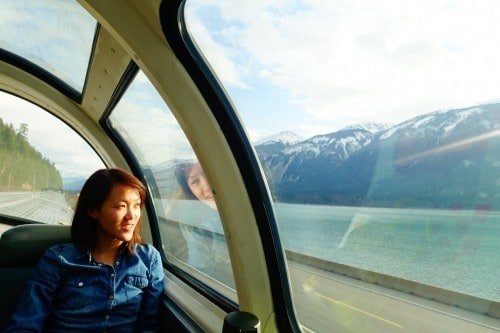 Surviving 27 hours on Rail – Vancouver to Edmonton. Me and my window seat in the Dome carriage on The Canadian

’27 hours?!’’ was the incredulous remark with horrified faces I got from my new found friends I met at the backpackers I was staying at in Vancouver. 3 Girls – 1 Australian, 1 British and 1 Swiss with a mix of awe, pity and shock as I shared with them that I will be taking 27 hours on the rail in a chair seat from Vancouver to Edmonton the following day. 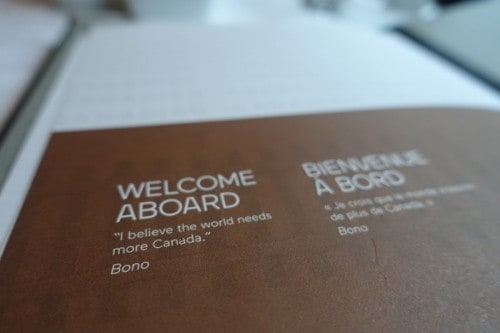 Welcome Aboard Sign on VIA Rail. Surviving 27 hours on Rail – Vancouver to Edmonton

Having just survived a 17 hours flight from Singapore to Vancouver transiting at Beijing, it is no surprise I got such response, given it is going to be a long arduous journey confined to a vehicle space, not to mention..no bed! My excitement turned to slight fear as I neared the timing of my rail adventure. The journey just had to start off dramatic as my car/ carriage personnel Ryan couldn’t find me when they were doing a headcount before setting off. I had gone to the other tail end of the train to try to detect some railway station Wi-Fi to send a last-minute WhatsApp message( how would I know every person still needs to be recounted even after boarding?!). They were hunting for me throughout the train before it set off, so since that incident, I have been labelled ‘The Wandering Girl’ whenever I bump into any of the train personnel on the 27 hours journey.

The rail company I went with after comparing multiple options was with VIA Rail The Canadian, as it had affordable Tuesday Promo/ Youth deals, not to mention I have seen videos of the ‘Dome’ carriage; that turned out to be my favourite corner in my train journey.

Some of the VIA train routes have the onboard Wi-Fi, but the route through the Rockies which I took didn’t have that nor phone reception for that matter. Hence, all passengers on board are forced to be away from telecommunications for that stretch, which could be a good thing; to just immerse in the scenery. 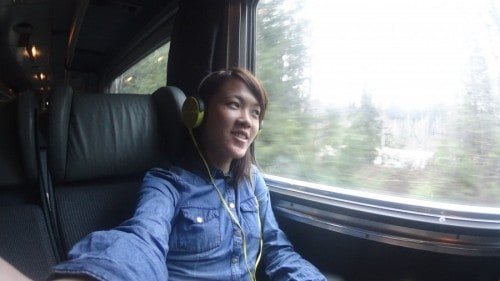 My assigned seat on board the Canadian, VIA Rail. Watching the world go by.

Let us start off with the scenery you get throughout the journey.

Not labelled one of the world’s best rail routes for no reason, the view you get is unbelievable, you get to see a mix of blue lakes and rivers, to acres of green pine trees, to fields of pastures with goats and cows. Then, the scenery can suddenly change to the autumn foliage of yellow and red, then to snow cap mountains, from cloudy skies to snow to golden sun rays. It’s like travelling through 4 seasons on the train! If you don’t believe me, check out the photos. 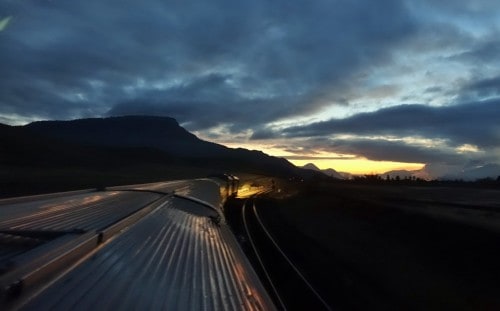 Sunrise view at 6.30am in the morning on The Canadian 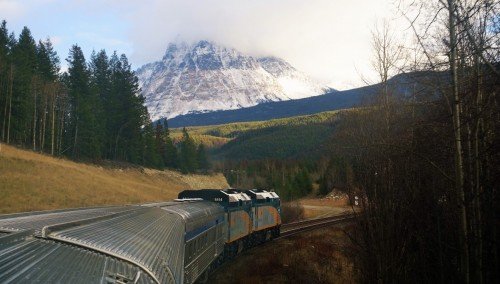 View from the Dome Carriage as you enter The Rockies Zone 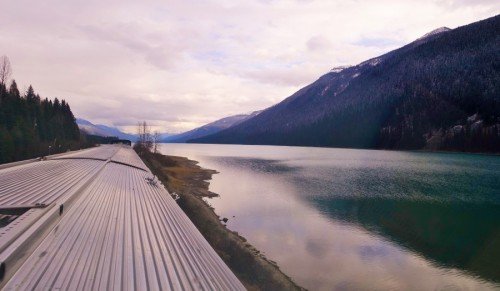 Go past a beautiful lake on your route. The cloudy skies and eerie mountains add to the mystical effect of this segment.

So hoping you have been convinced you will enjoy every aspect of the view in this rail ride, moving on to the list of survival tips to stay sane and happy in that long journey in a seat (especially for all unwilling to pay SGD$400 for a sleeper carriage bed). 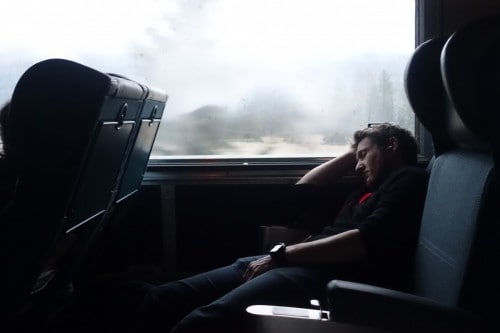 The New Zealander on The Canadian. Stu, my new friend next door I made on the long ride on the train. Caught in his periodic snooze;) I could tell a blanket would have made it a lot more comfortable. 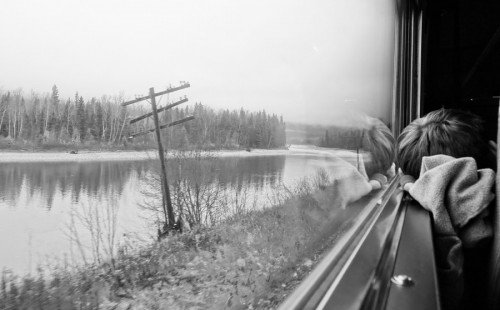 Sleep your way through the VIA Rail Nights 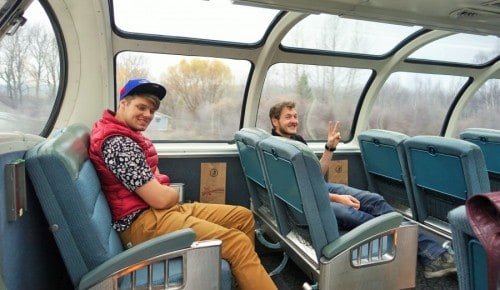 #2 – Food to last the train journey

Depending on your budget, you can always get all your hot meals on board. If on a tighter budget, bring some food to survive the night. Not expecting to be eating all my meals at the diner for the whole 27-hour journey, I got a stash of supplies at IGA, the local supermarket. My stash consists of a mix of granola bars, juice (Snapple is only SGD$1.50 here), buns, cup noodles and hot cocoa. 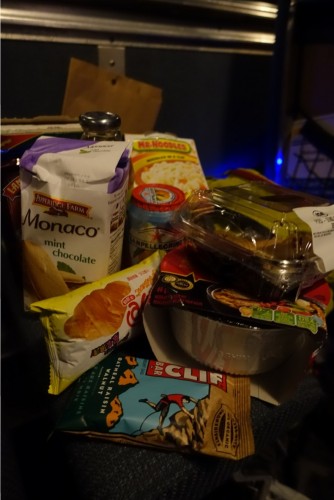 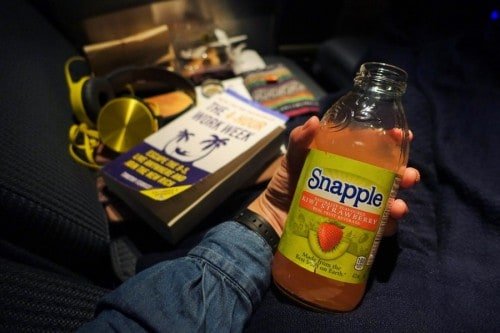 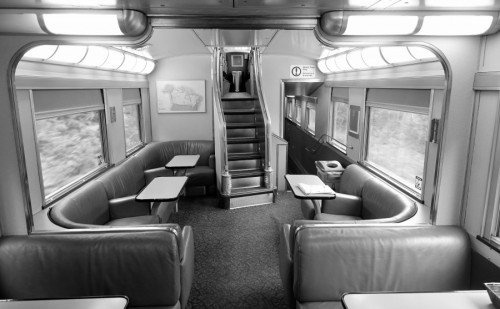 Eating area for those who brought their own food. The staircase up leads you to the dome carriage for the 360 degrees view of the surroundings.

One can always get lucky like me, where I was just browsing at the breakfast menu contemplating when I got forced into being a translator to 2 helpless tourists from China who couldn’t read English and communicate their meal options to the restaurant manager. Hence, given I was at the right place at the right time, my half passable Chinese became the lifesaver of the restaurant manager, who insisted I sit in the subsequent meal in the diner complimentary. 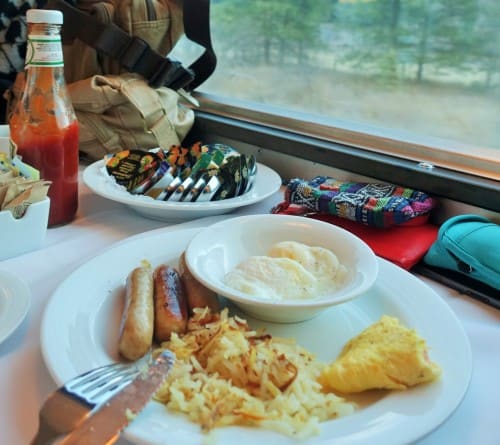 Breakfast served on board The Canadian in the dining car. Nice hot poached eggs with toasts/ tea and juice for a good perk up to the morning. For an economy seat, you would need to pay for the meals on board, and this one here costs about CAD$12, which is around SGD$13. 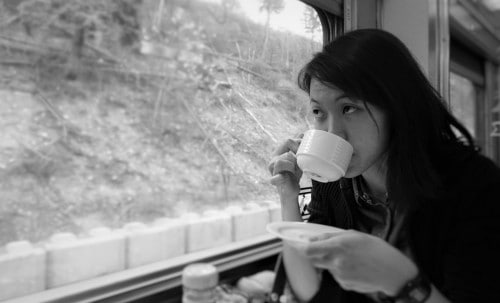 Enjoying a hot cup of tea watching the world go by 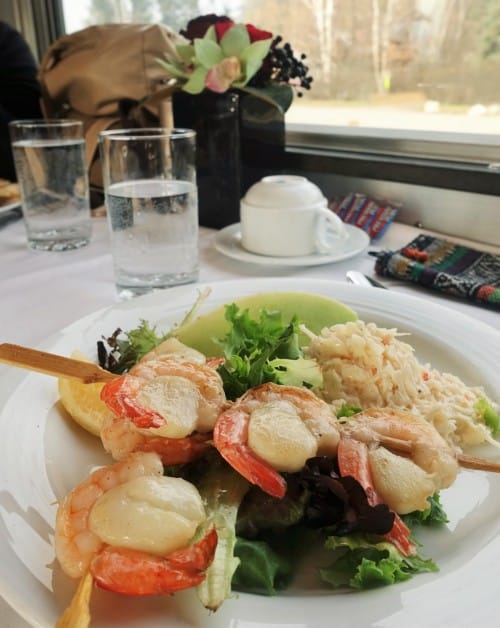 Lunch on board The Canadian VIA Rail

Lovely seafood lunch option on board the VIA Rail. Lunch needs to be reserved beforehand and comes in 2 slots – 11.30am or 1 pm.

Though I foresee that half of the journey will be spent sleeping, it is not survivable without some form of entertainment. So bring magazines, a book you’ve never got to finish reading, some drama series on your tablet and other gadgets to keep yourself busy all the way. However, please use the majority of the time to enjoy the view too, it is so much better. 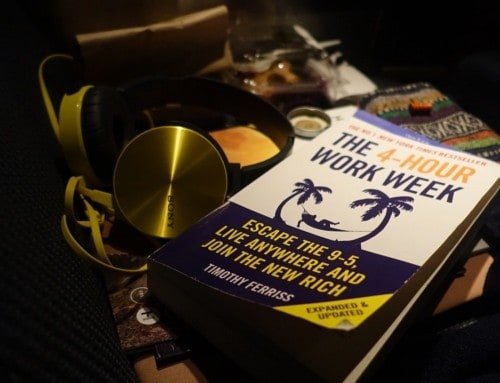 You WILL regret it if you didn’t borrow some half decent camera, as the scenery here is not going to be captured with an ordinary phone camera without an anti-shake feature. On the journey, look out for the Pyramid Falls on your right at approximately 15 hours into the train journey. There will be announcements made over the intercom when nearing, so listen out for it. Throughout the day, always make time to go to the Dome carriage to marvel the 180 degrees view of the scenery. Truly beautiful, especially when the golden rays reflect off the river, snow cap mountains, and fall foliage converting the landscape to a sea of golden trees. 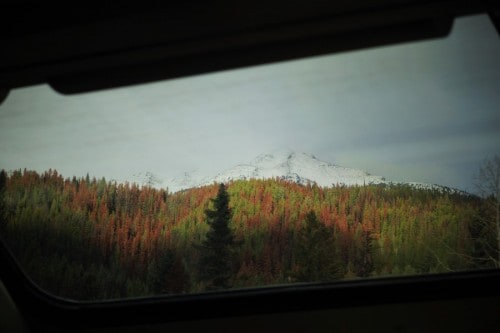 Colours of Autumn in full glory along the route on VIA Rail from Vancouver to Edmonton. 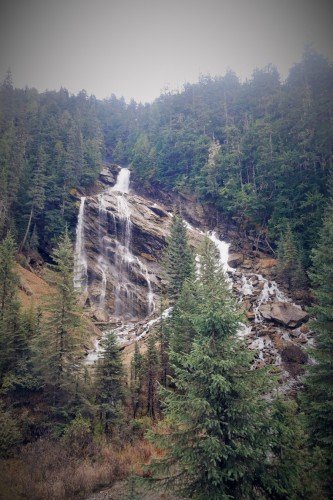 Pyramid Falls spotted along the route. Small trickle compared to its furious gushing power in summer. 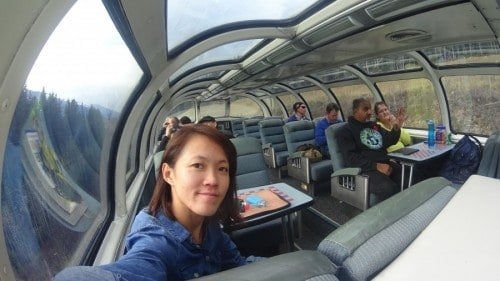 Selfie in the Dome Carriage on the VIA Rail. Beautiful isn’t it 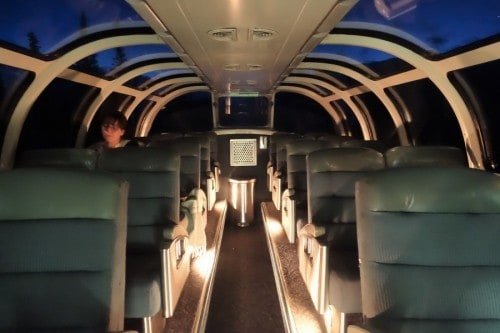 Below would be a summary of how to pass the time for the 27 hours:

Read a book, listen to some soothing music to get yourself ready for bed

Wake up for the sunrise and catch a nice hot breakfast/ lunch at the meals carriage ( enjoy the views outside the window’; the periodic/ erratic sunshine, cloudy skies and light snow)

Enjoy the remains of the daylight after lunch as the train closes into Jasper. This stretch is the most breathtaking stretch with the most spectacular lakes and trees and mountains. So stop being glued to your screen and look at the view.

It will start turning dark so there will slowly be nothing much to see. Prepare for another night and a short nap. Squeeze in a hot cocoa and catch up on reading as you close in on Edmonton at 11 pm at night. For tourist visiting Canada for the first time, I would strongly suggest to just do the stretch from Vancouver – Jasper, as you will reach before it turns dark, and the bulk of the scenic area is the route around the Rockies.

Hence, this concludes my 27 Hours Successful Rail Journey on The Canadian Train #2. A definite must try for those hoping to experience beautiful Canada in a different mode, and be lost in the moment. 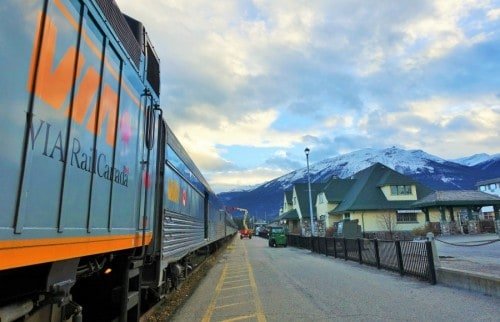 Train stopover at Jasper before another stretch to Edmonton. The Rockies surrounding the train station is truly spectacular.

Thus concludes my story about Surviving 27 Hours on Rail Across Canada.

For relevant stories, read up on my hiking trails adventures in Canada. 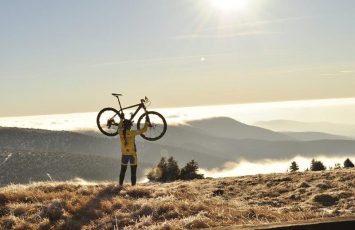