Not the Red Sea, not the Dead Sea,  but the Black Sea…

The Black Sea Region of Turkey – for all the mystery and enchantment in its name, is one of the 7 regions of Turkey, and possibly one of its more untouched parts that few from Asia Pacific has explored.

Turkey has always been regarded a captivating destination for people all around the globe, whether it is for its iconic hot air balloon scenic rides in Cappadocia, salt lakes or rich religious/ historical places like Ephesus, Troy and Amazon.

However just further northeast of Turkey fringing the borders of Georgia is a barely touched but very beautiful part of Turkey – named ‘The Black Sea Region’.

It got its name from the distinctively darker colours of the water, due to the colder sea water temperature found in this part of Turkey. This region is also often set in a foggy cloudy atmosphere given it has rain 9 out of 12 months of the year, hence gives it its mysterious allure and mood.

You can enter the Black Sea Region via a couple of ways. But the route we took was:

Istanbul Airport –> Hopa (INTERESTING FACT: Arrive at Batumi Airport at Georgia Border with a 15-20 minutes shuttle to bring us back to Turkey Border) –> Rize –> Giresun –> Amasya –> Samsun Airport –> Back to Istanbul

So here’s a bird’s eye view on what are the best sights in the Black Sea Region and why it is a beautiful part of Turkey definitely worth its exploring.

The 5 Best of the Black Sea Region of Turkey:

We had a relaxing and smooth 1+ hour flight on Turkish Airlines into… Batumi Airport. Interesting fact – while our domestic flight destination is Hopa, we were actually touching down in Batumi, which is Georgia, another country altogether. Turkish Airlines is just using their airspace/ grounds to land the aircraft, and when we disembark, there will be 2 signs spotted– one indicating ‘HOPA’ and the other ‘BATUMI’. Once we walk into the HOPA gate, we will basically just have to take a bus/ shuttle which will bring us on a 15-20 minutes coastal route till we reach the Turkish Border of Hopa.

Rize is the tea-land of the black sea region.

It has plenty of tall lush forests and trees of green gold and brown, homes of the black hives where the bees cultivate their precious honey – and sold as Anzer Honey in the stores. This little town set in the Ayder Plateau, also known as ‘honey forest’ is also popular for fishing, hot/ cold crystal clear springs and having tea gardens that sells organic black tea.

ONE trademark of Rize is its long winding fast moving waters, where the current and fast moving waters make it a perfect draw factor/ iconic destination in Turkey for whitewater rafting in the months of Jun – Aug. It’s such a waste that we weren’t there in the right season to experience this thrilling adventurous activity.

Things to see in Rize:

These snow capped mountains are perfect for heli-ski in winter, and some good hiking in summer (months of June – Aug). This iconic mountain range attracts a lot of avid European skiers and snowboarders to Turkey just to conquer its slopes.

On the way departing from Rize towards Giresun, we went pass Trabzon and stopped at a stunning lookout point.

The locals here have claimed proudly that some of the best cherries in Europe and hazelnuts in the World come from none other than Giresun Turkey. One interesting thing about this city with its 400K population is Kuskoy – ‘Bird village’ in Turkish. In here, you can watch how the locals learn to communicate with each other with bird sounds, whistles and tunes, NOT words. They even have a school to teach people how to ‘speak’ it. It is so fascinating!

We had the privilege to take a stroll around the old housing area of the locals followed by a cruise around the coast of Giresun with Altin Post ferry. The little ferry visit to Giresun island was absolutely beautiful, with great weather that day and the sea gulls flying alongside the ferry. We got to Giresun little island, or what I like to call it ‘The Seagull Haven’ about 30 minutes later. This 4-hectare little island has some amazing old stone ruins which used to be monasteries and some really rich flora and fauna. The stunning sea breeze and foamy waters alongside the beautiful coastal cliffs with seagulls flying in the wind and nesting just made it so magical and untouched. I later found out this little island is ironically the ‘biggest’ island in the Black Sea Region of Turkey.

I could not bear to say goodbye to those seagulls and the beautiful coastal cliffs.

Some little trails to explore on the island is Hamza Stone, Monastery Ruins and Firin Oven.  The origins on this island use to comprise of  a stone temple, fortifications and ramparts, and two wine or oil presses. The now roofless stone temple was in the ancient times attributed to the fearless Amazons who held religious rituals on these cliffs.

Other parts of Giresun that I would love to visit and explore the history more of if I had more time: 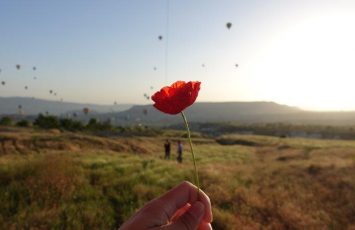