Tucson in Arizona is an ideal winter destination with many surreal sights and adventures in a unique and breathtaking setting. Whether you are looking to stay strong and practice rock climbing during your off-season or simply want to drive, stroll or scramble up a variety of awesome canyons with jaw-dropping scenery, this destination is epic.

More specifically, the Santa Catalina Mountains on the north and northeast sides of Tucson, AKA Mt. Lemmon by the local climbing community, are home to many deep, rugged, cactus-studded canyons rimmed with impressive granite cliffs and towers. The mountain range is home the southernmost skiing area in North America with the highest peak being Mount Lemmon, coming in at 9,157 ft (2,791 m) above sea level.

While skiing may not be a worthy destination, the climbing and hiking is spectacular. The altitude of the city is at 2,389 ft (728m) a 7,000 vertical foot climb up to Mt. Lemmon’s summit and a huge variety of microclimates along the way.

There is also a renowned expert-level mountain bike descent on the west side of the range. It can be shuttled up using the scenic well maintained Mt Lemmon Highway by local bike rental and tour providers. You will see scores of strong bikers pedaling up this road as well which is a major attraction in and of itself.

The Mt Lemmon Highway, the main access road to Mt. Lemmon is in the northeast corner of Tucson. A rather slow drive across the city due to a lack of highways in the city proper will get you there; I recommend finding a hotel or bed and breakfast on this side of town for easy access if you are planning multiple visits.

The adventure starts the moment you reach the city, the views of the Catalinas is awesome from many vantage points and is one of the most photographed locations in a metropolitan local.

The Phoenix airport, Sky Harbor, is the most inexpensive access point and is under a 2-hour rental car drive to Tucson through Tucson International Airport can also be an option. If the weather takes a major turn for the worse, rare, Phoenix is warmer and has many hiking, biking and rock climbing attractions as well.

This occurred during one visit but, I went to a low altitude Tucson sport climbing location, La Milagrosa Canyon, pics above, and, it was GREAT climbing and was also near-by the Mt. Lemmon highway. Access was not simple and a local guide or at least a reliable GPS point is highly recommended.

That said, access to many of the crags on Mt. Lemmon are “adventurous,” with some steep cactus laden trails winding around wild canyons and rock outcropping. I regularly use the app Climbing Project for GPS points, pictures and beta as well as guidebooks. Squeezing The Lemmon III is the current guide book for the mountain. Google earth can be useful as well.

If you are fan of rock climbing in the USA, check out my comprehensive list of top 12 here.

Driving in from Phoenix, Tucson greeted us with a beautiful sunset as we made our way to the Air B&B we had reserved the month before.

We stayed in the middle of Tuscon for inexpensive prices and access to all parts of the city but, I do not recommend this.

Central Tuscon is mostly comprised of “Rougher Neighborhoods” that are poorly lit. Locations nearer the Mt. Lemmon highway will be more convenient and attractive for these adventures, Tanque Verde in the north east corner of the city would be one such location.

We rose bright and early the following morning, grabbed breakfast burritos at one of the million little Mexican restaurants and were zipping up the mountain.

What you will see in the area

The road itself is a true feat of engineering, and the views are impressive the whole way as the giant saguaro cactuses give way to all kinds of interesting succulent type flora and pine species.
Spring is a great time to see it, especially April, because all kinds of alien-looking cactuses and plants are in full bloom!

Our first climbing destination was The Ruins. We picked this area because it is a south facing crag not too high up so, we were excited for a nice warm experience! At just over 4 miles up the road, we arrived at the Molino Canyon Vista parking lot.

Looking due east over the far side of the parking area is a short improved hiking trail revealing a clear stream cascading over bright white rocks at the bottom of a steep but small canyon. Beyond and above the canyon profiled along the skyline is a majestic tiger-striped cliff, Amateur Hour, a crag I will likely visit in the future.

As we hopped out of the car there were two guys putting on backpacks with climbing helmets dangling off. I asked them where they were going to climb and when they announced their trip to The Ruins I told them we were grateful to have someone to follow. They put down their packs and offered to wait till we were all packed up so they could accompany us! I was overjoyed after having more crag searches over the years then I’d care to admit. We thanked them as we hurried to head out.

How to get to The Ruins

They took us upstream of the little canyon to a flat spot to cross the creek and up the far side on a steep trail north of the Tiger striped cliff. At a fork in the trail 2/3er’s of the way up they told us going right went to the Amateur Hour climbing area and continuing up over the ridge would deposit us at the Ruins.

After 35 minutes of quick hiking up and onto the ridge we arrived at the top of the cliff on the opposite side of the ridge. We worked our way past a fence and down around the right side of the wall. We warmed up on a couple of slabby 5.9s and they felt hard, I was nervous and rusty from months of not climbing outside but, all went well. Then we worked down the cliff to where it was steeper and taller to crank up some great long routes! We used a 70m rope.

Best Routes at The Ruins Crag

Techno Savage 10-, Medicine Bag 10, Black Feather 10 + and Big Pow Wow 10+ were my personal favorites. The climbing grades here felt fair if not a bit stiff. The roofs were super fun and challenging. More then one local was kind enough to take several pictures of me unsolicited, which was GREAT since I never ask my belayer to do that, safety first. The locals recommend Paco’s downtown for some delicious Mexican food, but, we did not join as our adventure was still incomplete.

After climbing we headed up Mt. Lemmon Highway and were greeted with many awesome sunset views over Tucson. Near the summit is Summer Haven, a small town, we ate at the Sawmill. It was basic grill type food but, the ambiance was cool, historic and had nice views off the patio but, it was freezing cold outside after dark at almost 10’000 ft. The staff told us about the nearby Sky Center that hosts highly rated astronomy events nightly, reservations required. After dinner, we were worn out and headed back to Tucson.

We headed up the mountain again that next morning and decided to re-drive through one of the coolest stretches of highway before climbing just to see it in the daylight. I did some time warp video to capture the spectacle and we stopped at the large Windy Point parking area for more unfettered views. There we met more climbers, these guys visiting from Alaska.

They encouraged us to climb there and I agreed since it was a nice balmy day even 13 miles up the road but, I wanted a warm-up climb and the climbers recommended the Lost Hawk Pinnacle off the road a few 100 yards down from the windy point lot. We agreed to meet afterward to do one of the most photogenic routes on the mountain. I could not find the tower despite scrambling all over the steep loose hillside and gave up after an hour and several cactus encounters later.

We went straight back to our new friends who had hung draws on the famous, Steve’s Arete 11-, on the Hunch Back-formation. They graciously offered up their rope and told me to get busy. I did not hesitate! I handed them my Gopro and straddled that bad boy straight away! The first easy to reach yet high clip had me shaking and slipping but, I was clipped in and pumped up to get the on-sight, turned out to be a fun and ascetic send. I did a short video of some of the epic drive up as well as the climb found here:

We got some more beta after that climb from our friends; when I realized my dumb mistake, and the next thing you know we were roping up at the climb, Chihuahua Power 9+, on the Lost Hawk Pinnacle.
It is a cool 70ft spire near the road with a less than vertical face containing some impressive quarts bands that defined two shallow roofs.

Definitely a cool couple of sport climbs on that face as well as many other sport and mixed (gear and bolts) routes in the immediate area. I made a time-lapse video of Chihuahua Power as well as a short look from the top. Mission accomplished!

We headed down the mountain for the last time as we had an afternoon flight to catch in Phoenix the next day but, knowing we would have one morning left we decided to take a hike up the acclaimed Finger Rock Trail. The trailhead departed from million-dollar mansions in the Catalina Foothills area on the north edge of Tucson.

We followed the bottom of the canyon along a gurgling little stream for a long mile before heading up the side of the canyon wall for the remainder of our hike. Again, the views, as well as the plant life, was spectacular as we made our way up the steep rocky trail for another couple miles. We did not have time to reach Finger rock but were still pleased to get a final workout in before the journey home to snowy Colorado.

Climbing at Tuscon in Spring

I am excited to return here in April expecting to see 1,000’s of flowers, perhaps mountain goats, and even some waterfalls on the 100’s of smaller adjoining canyons if the weather cooperates.

Our experience is just a teaser of what Tucson has to offer the mountain athlete but, be prepared, many approaches to the cliffs are tricky. The heat and cold can both catch you by surprise in this desert climate and definitely bring sunscreen and a pair of tweezers, the cactus are everywhere, lol! 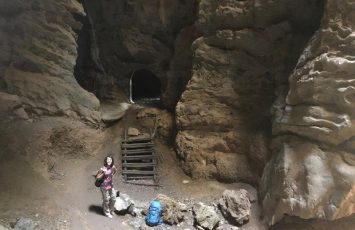 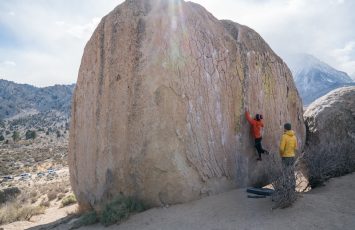 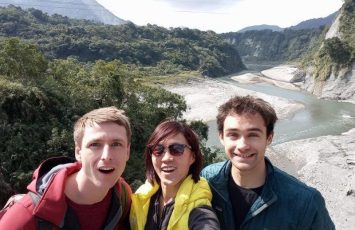