To the untrained eye, Kalymnos is just like any other Greek island – turquoise waters, giant limestone cliffs, and little Greek villages crumbling under the strain of time, however, since 1995, it has been capturing the attention and hearts of the climbing community. Aided by several international climbing festivals and a strong infrastructure, the Kalymnos climbing community has grown and developed the island into a world-renowned climbing destination in Europe, known for an abundance of sports routes across a wide range of grades set against a gorgeous Aegean backdrop.

Kalymnos built a large portion of its economy on sponge fishing, but due to a viral disease in 1986, this industry has suffered and largely collapsed. These days, the island’s income largely comes from tourism. The majority of visitors flock to neighboring islands, and so visitors to Kalymnos can expect a more environmentally conscious crowd and a more local and authentic atmosphere. Visitors of Kalymnos are mostly interested in exploring the natural surroundings, climbing, hiking, and visiting the coast.

Where is Kalymnos in Greece

Kalymnos is a small island in the Icarian Sea, just a stone’s throw away from the Turkish coast. It can be found right in the Southeast corner of the Greek archipelago, as part of the Dodecanese islands, and situated between the islands of Leros and Kos. As with most of the islands in the Aegean Sea, it is officially part of the country of Greece and the official language is Greek, although most touristic establishments also possess some grasp of the English language.

The climbing background of Kalymnos

Like much of Greece, there are giant limestone cliffs everywhere on the island of Kalymnos. After the Italian climber Andrea di Bari visited the island in 1996 and saw the potential of the quality limestone, he began to establish a climbing scene by opening 43 sports routes in 1997. Since then, the climbing scene has quickly expanded and developed into a world-class sports climbing destination that attracts both casual climbers and professionals alike.

Kalymnos has hosted numerous climbing festivals to further enrich the climbing community and local scene. There is a yearly event every September that attracts a huge number of climbers to the small island.

While predominantly a sport climbing destination, there are a few high-quality multi-pitch routes bolted in Kalymnos. There are no multi-day routes, official bouldering areas, or trad climbing routes established on the island. That being said, there are a large variety of routes, from technical slabs to pocketed overhangs, at a range of different difficulties, so there is something that every climber from every background should enjoy.

Kalymnos is home to more than 3400 sport climbing routes, an impressive amount for a small island. Most of the routes are easily accessible with only a short hike to the base of the crag.

The routes are graded using the French grading system, and routes have been graded from 5a to 9a (5.7 – 5.14d on the Yosemite scale), so climbing can be enjoyed by both beginners and experts alike. The average route is roughly 30m in height and completed in a single pitch. There is no standard character for climbing routes as there are so many available, but some common themes are as follows:

As most routes are single pitch sport routes, the standard sports equipment rack is all you will need to get started, although some routes on stalactites require some additional slings to reduce rope friction. The infrastructure is strong in Kalymnos, and routes are frequently re-bolted to ensure maximum safety.

In more recent years, the climbing community of Kalymnos has opened some longer routes, some of which require more than a single pitch to complete. While this is not the standard for climbing in Kalymnos, it is worth noting that it is possible, and if you intend to try some of the multi-pitch routes, to bring sufficient equipment to protect yourself. These can range from 2 or 3 pitches, right up to the 11 pitch route “Eterna” found on the South face of Telendos.

Kalymnos prides itself on having routes that are attractive to climbers of all abilities and styles, whether they are transitioning from indoor to outdoor climbing, taking an easy climbing vacation, absolute beginners, or are climbing professionals looking to add to their repertoire of red-pointed 9as.

Routes are graded using the French system. Often you can find the difficulty of the route painted at the base of the route, however, gradings are frequently re-considered, and in order to keep consistent grading across the island, it is normal that grades are updated and these painted route numbers are inaccurate.

Best time of the year to climb at Kalymnos island

As the climate on the island is fairly stable, it is possible to climb throughout the entire year, however, the routes that you choose should be reflective of the season.

Greek summers are warm, and so rock climbers will naturally flock to the shaded routes, as climbing in the direct sunlight will quickly lead to potentially dangerous dehydration. If you intend to spend the entire day climbing in summer, be sure to pack a couple of long-sleeved jackets, as the ocean breeze can be cooler than you anticipate when you are belaying.

Kalymnos is blessed with a mild and sunny winter, perfect for climbing on sunnier routes, however tourism in the entire region tends to shut down over the winter months, and accessing the island becomes more difficult, accommodation becomes sparser, and restaurants often close, all of which can be problematic and are worth factoring in your planning.

Autumn is the ideal time for climbing, provided you don’t mind following the crowds. Days are long, warm, and dry, and the sea is warm enough for swimming. October is the peak climbing month for this reason, which some will see as a good way to experience ideal conditions and connect with the climbing community, but others will consider it a burden due to potential crowds.

Spring is also an ideal time for climbing, however, the possibility of rain is slightly higher, and many consider the sea a little too cold for a post-climbing cool-down. You might want to try some cave climbing spring the spring, but do be aware that the rainwater can still seep its way inside and soften the rock.

How do I get to Kalymnos island?

While there is a small airport on the island, the most popular option to access Kalymnos is via the international airport on the neighboring island of Kos. From here, it is best to take a ferry to Kalymnos. While many airports will have direct connections to Kos, it may well be the case that you have to first fly to Athens and then travel to Kos from there. It is also possible to fly to Bodrum in Turkey and to travel by Ferry from there.

You will likely find it harder to get to Kalymnos in the winter months as mainstream tourism shuts down in the region and ferries become less frequent. Some budget airlines stop flying to Kos during these months, but it is still possible to get to the island with a bit of determination.

To navigate around the island itself, it is best to hire a private car to be able to access the crags without relying on public transport or taxis. There are plenty of car rental places in the municipality of Kalymnos where most of the ferries land.

Where to stay on Kalymnos island

The island is fairly easy to navigate if you are hiring a car or a scooter, and so staying anywhere on the island is an option. Do be aware that some of the guesthouses and hotels close in the winter months as the only people visiting at this time tend to be climbers. Most people tend to stay in guesthouses, Air BnBs, hostels, and hotels which are all ubiquitous across the island. Hosts tend to be knowledgeable of the climbing scene and helpful at helping you find the best solution to access the crags.

For those eager on camping, there are a few opportunities, such as the Governor’s Kalymnos Beach Camping, however warm days and cool nights make camping a little difficult. Wild camping is not permitted on the island, however is often tolerated if done responsibly.

What else to do around Kalymnos island

The majority of visitors to the Greek islands are not climbers, and there is a bustling tourism industry with which to entertain yourself during rest days or downtime.

As the island is surrounded by the clear waters of the Aegean Sea, swimming and water-based activities are popular, particularly in the Summer and Autumn months. There are numerous beaches on which to relax, some very busy and others well secluded. Diving, sailing, kayaking, and windsurfing are all possible for those seeking something a little more adventurous than a simple dip in the ocean.

Kalymnos has a vibrant nightlife scene, which provides a safe and secure night out. There is nothing more wonderful than wrapping your sore fingers around a cold Mythos beer, chomp down some fresh seafood as you watch the sun go down over the ocean. The parties also give you a great chance to celebrate your difficult sends and to unwind.

Accessing other Dodecanese islands is also very easy from Kalmnos, and island hopping is a fantastic way to explore the diversity of the region and to scratch a little deeper into the local culture.

Here are the answers to some frequently asked questions about Kalymnos.

How big is Kalymnos island?

Kalymnos is 111.1 square kilometers, with a population of around 12,000 inhabitants.

How long is the ferry from Kos to Kalymnos?

Ferries between Kos and Kalymnos are generally less than an hour long. At the time of writing this, an adult fair is only 6.00€ without a car.

Can you fly directly to Kalymnos?

It is possible to fly directly to the island, however, it is much more common and usually much cheaper to fly instead to Kos and to travel onwards from there. If you are limited for time, it is maybe worth looking for direct connections, however, if you have the luxury of a couple of extra days, you can enrich your experience by visiting additional islands on the way to Kalymnos. 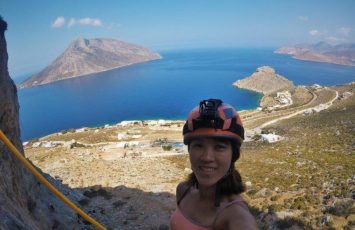